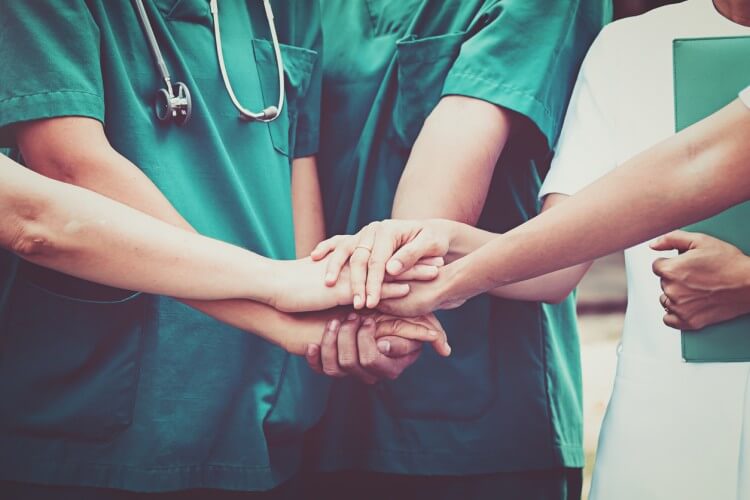 According to the U.S. Bureau of Labor Statistics, only 10% of licensed practical nurses and licensed vocational nurses are part of a nursing union. The number of unionized registered nurses is double that at 20%.

A labor union, also known as a trade union, is a formally organized group of workers that has united to make decisions about the terms and conditions of their workplace and their respective roles, and to collectively represent their members to their employers. Labor unions advocate for workers in several industries, including manufacturing, education, and health care.

Unions strive to improve working conditions for employees, helping them push for better benefits, higher wages, and safeguarded rights. Nursing unions are no different in that regard. In fact, several nursing and health care industry-based unions are currently active in the U.S. Learning about nursing unionization’s pros and cons can guide health care workers in deciding whether or not to join a nursing union.

What Is a Nursing Union?

A nursing union is composed of registered nurses (RNs), licensed practical nurses (LPNs), and licensed vocational nurses (LVNs) who advocate for themselves regarding critical workplace issues.

Some of the most common issues nursing unions handle are:

Significantly, the pandemic has inspired more nurses to consider joining a nursing union. Nursing unions played a pivotal role in pushing for required personal protective equipment (PPE) for nurses delivering care to patients with COVID-19. This issue illustrates how nursing unions advocate for the rights and safety of their members.

The following are four major nursing unions in the health care industry.

The American Federation of Teachers and Health Professionals (AFT) is the second-largest nursing union in the AFL-CIO, which currently has over 3,000 affiliates. Most members of the AFT are nurses who work in hospitals and health care facilities; however, they also report having approximately 15,000 school nurses as union members.

The Service Employees International Union (SEIU) — Nurse Alliance has 80,000 members across 21 different states. SEIU is dedicated to improving patient outcomes and the workplace satisfaction of their nurse members. SEIU union leaders and members advocate for government policies that focus on health care reform.

The United Food and Commercial Workers International Union (UFCW) represents over 55,000 workers in the health care industry. They focus on negotiating for better contracts on behalf of their union members. According to their website, union workers they represent earn wages that are 22% higher than their nonunion counterparts.

Nurses considering joining a union should weigh the nursing unionization pros and cons.

Thousands of nurses have joined National Nurses United, the American Federation of Teachers and Health Professionals, and other unions because of the commitment these organizations have made to improving workplace conditions and empowering members to advocate for themselves.

Although not all nursing unions are the same, most of them are able to provide a core group of benefits to their union members. These include:

Establishing a Process for Disciplinary Action

Nursing unions establish an official process for nurses who are facing disciplinary action from their employers. Both sides must operate within these guidelines, helping ensure that nurses have some assurance that they will not be punished unfairly or inconsistently, or be unjustly terminated.

Assisting with the Investigation of Grievances

A nonunion nurse who raises a complaint with management is essentially on their own. They’ll need to represent themselves and potentially hire their own attorney. On the other hand, nurses who are part of a union will have the benefit of the union investigating the grievance on their behalf. Some unions will even provide an attorney for their members.

Nursing unions push for certain standards within their hospital or health care facility to ensure their members can work safely. Examples include:

Higher wages and guaranteed raises are also reasons nurses decide to join a union. Union members will have assurance that their union is advocating on their behalf for higher wages. Statistically, nursing unions have proven to be highly effective at this. Median weekly earnings of unionized healthcare practitioners, including registered nurses, are about 15% higher than those of nonunion members, according to the BLS.

Better benefits are another big reason why many nurses decide to join a union. Nursing unions consistently push for:

The Cons of Nursing Unions

Considering nursing unionization’s pros and cons may shed some light on why the ratio between union nurses and nonunion nurses remains skewed in favor of not joining a nursing union. Although the benefits of joining are many, they do come at a price, both financially and in the potential effects union membership can have on the pace of a nurse’s career advancement.

The cons of being a nursing union member include:

As previously mentioned, being part of a nursing union comes with a price, and that price is union dues. Most nursing unions typically charge a one-time fee for joining the union and then an ongoing monthly membership fee. Union dues can either be a fixed amount or a percentage based on the individual nurse’s pay.

If a nursing union decides to go on strike, policy may dictate that all members of the union have to participate. Even if a nurse disagrees with the reasoning behind the strike, not only must they participate, they must also accept that they won’t be paid for hours not worked because of the strike.

To cite an example of a recent strike, in 2021 some 34,000 Kaiser Permanente health care workers went on strike due to a labor and wage dispute. (Kaiser is a California-based managed care consortium.) According to The Guardian, Kaiser’s claim that their labor costs were much higher than their competitors’ triggered the strike. Kaiser first proposed raises of 1% a year for three years along with a pay cut to new hires’ salaries to 26% below those of its current employees.

Kaiser’s initial proposal was rejected by union members. Faced with the looming threat of a strike of tens of thousands of health care workers, the pressure was on Kaiser to devise a satisfactory deal. Fierce Healthcare reported that a deal was eventually reached between Kaiser and its employees, avoiding the strike and a potentially disastrous situation.

Although strikes are uncommon in health care, union nurses need to be aware of the impact an unpaid strike may have on their finances. However, many unions will have a strike fund prepared to help striking employees meet their basic financial needs.

Individual union members don’t always agree with the majority. Members of a nursing union are free to voice their dissenting opinion on any matter to union leadership. They can file a grievance if they feel they aren’t being fairly represented by their union. However, union decisions are made through voting, and the majority result of those votes determines the union’s stance on any given issue.

Nursing unions reward members with seniority. While it makes sense that a nurse with seniority might be first in line for a promotion, raise, or time-off request, it creates a potential disadvantage for newer members, particularly if they’re outperforming their more experienced counterparts.

Nursing union policy is to mediate every dispute — large or small. Mediation can help support nurses involved in a complicated dispute. However, in the case of simple disputes that could be easily resolved, nursing union mediation may prolong and complicate the overall process. This can cause undue stress, create tension between employer and employee, and result in a significant amount of time spent in mediation.

Should You Join a Nursing Union?

The pros and cons of nursing unionization give any nurse considering joining a union a lot to think about.

Deciding whether or not to join a nursing union requires careful deliberation. Ultimately, union membership offers both risks and rewards. A nurse considering joining a union should ask themselves what they value most.

Some of the main topics nurses should consider are:

Weighing the nursing unionization pros and cons is a difficult process. Nurses who are having a tough time deciding should consider interviewing union and nonunion nurses to gather insights that may help guide their decision.

Continue Your Journey in Nursing

The decision to join a nursing union is an important one, but the most important part of health care is ensuring high-quality outcomes for patients. Front-line medical workers serve in some of the most important roles in the country. They are the first point of contact with people in need of medical care, and they work tirelessly to provide it.

If you’re looking for a fulfilling role with more direct influence on patient outcomes, the best way to advance in the field of nursing is by investing in your education. Hawai‘i Pacific University’s online Master of Science in Nursing (MSN) instills the skills and knowledge that RNs need to move into nurse practitioner roles. Visit the program page to learn more about HPU’s online MSN degree and concentration options.

Burnout vs. Compassion Fatigue in Nursing

The Importance of a Nurse’s Role in Patient Safety

American Federation of Teachers, About Us

The Guardian, “‘A Slap in the Face’: Nurses’ Strike Signals Kaiser’s End as Union Haven”

Union Plus, What Is a Union?

Do More With an HPU MSN
Get Program Details

Established in 1965, Hawai‘i Pacific University (HPU) is the state’s largest private university, located on the island of O‘ahu. We leverage our geographic position between the Western and Eastern hemispheres to deliver an educational experience that unites diverse peoples from around the world.

X
Explore HPU
This will only take a moment
X